Despite the growing importance and attention given to urban agriculture, the importance and potential of growing fish and edible aquatic plants in and around cities remains largely unknown.

The term “urban aquaculture” captures a broad array of activities. The cultivation of fish and aquatic plants is widespread throughout many cities in Southeast Asia and to a lesser extent in Africa and Latin America.

Aquatic production is intrinsically linked with the livelihoods of a significant number of the lower-income urban households. It includes a wide array of activities, from extensive to intensive cultivation of both fish and aquatic vegetables. However, the production systems involved are generally semi-intensive often utilising wastewater from the city as a source of nutrients and fertiliser to increase production.

This issue of Urban Agriculture Magazine presents PAPUSSA findings and articles on periurban aquaculture from other cities to a broader non-aquaculture audience. The PAPUSSA (Periurban Aquatic Production Systems in South-East Asia) project, aims to give an overview of the status and impact of periurban aquatic production systems in four cities (Bangkok, Phnom Penh, Ho Chi Minh City and Hanoi).

Possible scenarios for the future of these communities are described in several articles. Based on the preliminary findings, the disappearance of some systems in the four cities studied is inevitable under urbanization although there is huge demand for and consumption of aquatic vegetables, especially water spinach. The continuation of these practices will depend on city planners’ ability to coordinate and develop strategies. Articles from Africa and Latin America illustrate the potential for production of fish on a local, community, or even household level. 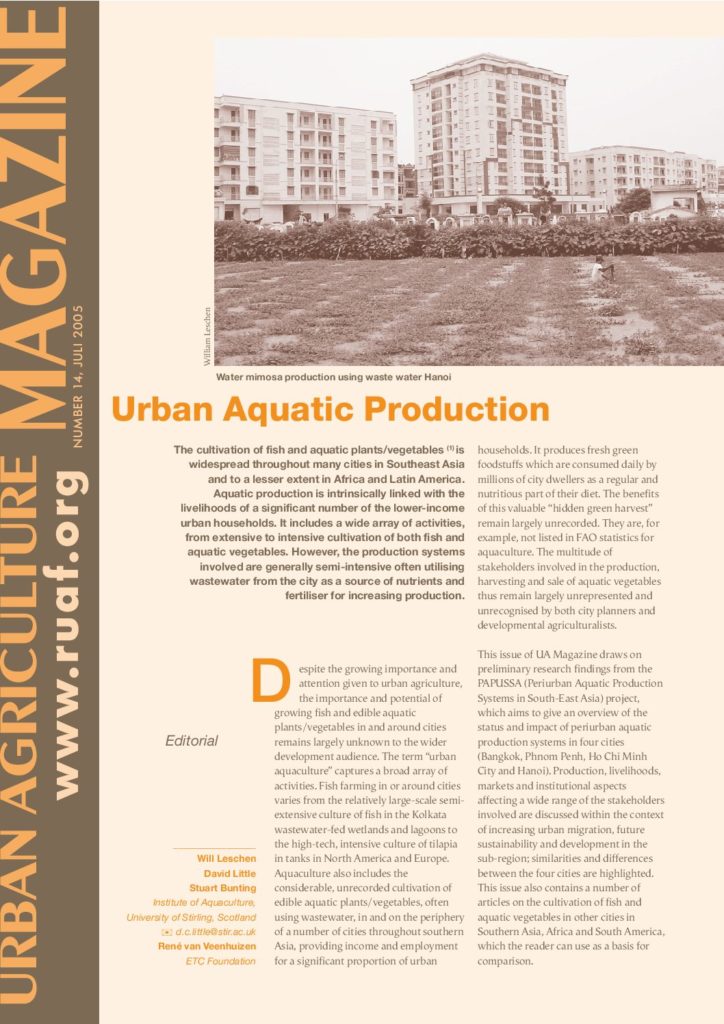