The right to food is recognised as one of the fundamental human rights within the global framework for sustainable development and it is embedded in different agendas. In order to promote prosperity and quality of life for all, the Right to the City, recognised in the New Urban Agenda signed in Quito, promotes ensuring that all inhabitants, both present and future generations, without discrimination of any kind, can create cities and human settlements, that are just, safe, healthy, accessible, affordable, resilient and sustainable. Furthermore, the Milan Urban Food Policy Pact recognises that rural-urban connections, tied to land use planning and territorial governance, can provide for a balanced exchange of resources (goods, people and knowledge) to prevent their depletion and enhance ecosystems recovery and use of renewable energies.

Within these frameworks, the Resilience Strategy of the Metropolitan District of Quito (released in October 2017) proposed building urban resilience with several actions, among them, placing food economy as one of the main pillars. As a result, a Multi-Actor Platform, called the Agri-Food Pact of Quito (PAQ) was assembled consisting of members from the private and public sectors, academia, civic society organisations, and cooperation agencies. This group proposed the signing of an Agri-food Letter of Quito, in October 2018 and worked on a sustainability plan for the Eco-Agrifood system of Quito as an input to the city’s food policy.

Today the city of Quito is dependent, vulnerable and diverse.

Dependent because there is a large gap between what it produces and consumes, if we consider the total production and consumption.

Vulnerable due to three factors:

Diverse because the food situation differs significantly in its territory (north, center, south, or west) in relation to availability, accessibility and consumption (inequality), and because its territory (rural-urban divide) and social relations are heterogeneous in terms of their capacity for food resilience.

The present approach understands the city as a series of complex systems where, what we named the “Eco-Agrifood System” has a fundamental role. In fact, as the city evolved, its requirement for food has been incorporated into the urban development pattern in response to a wealth of rules and regulations, social associations, and human and natural capital that enables food provision.

Under these circumstances, this article is part of an ongoing work that identifies the main agents of the Eco-Agrifood System of Quito and its vulnerabilities and strengths from a systemic point of view. The analysis takes into account the factors that contribute to food security and to its natural and anthropogenic threats. It also recognises the characteristics of the population that exacerbate vulnerabilities, in addition to factors such as climate change that amplify threats.
As a result of this analysis, general strategies are proposed to form a comprehensive food resilience plan for the city of Quito. 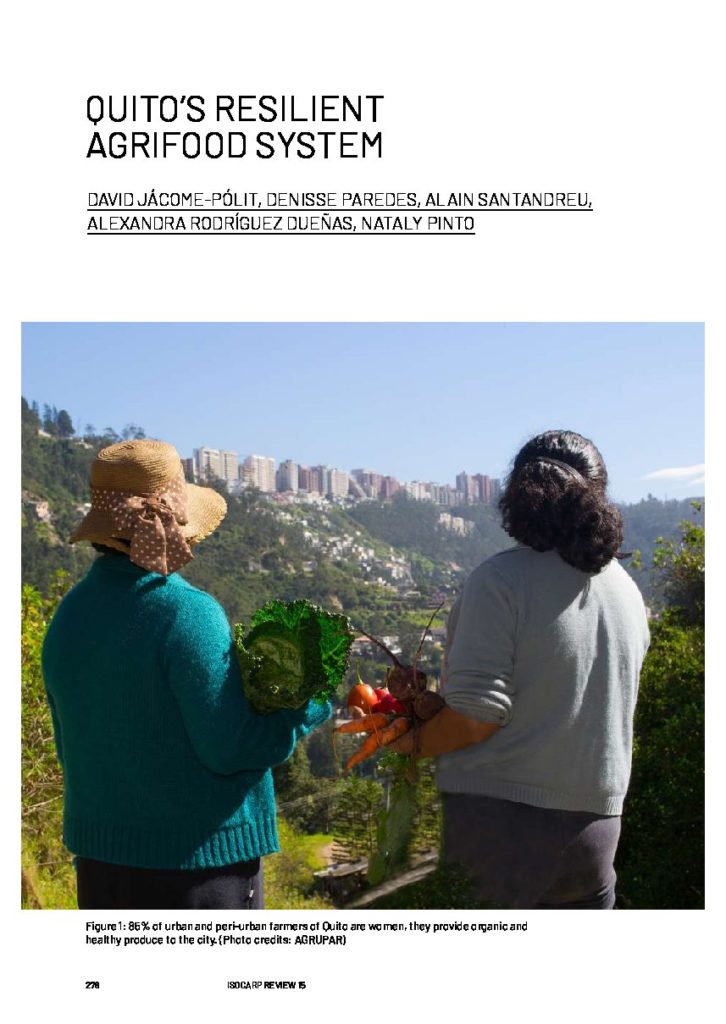