The City Region Food System (CRFS) indicator framework is a practical assessment and
planning tool designed to help cities to:

A city might wish to make use of this tool to assemble information in response to the following
‘big picture’ questions about the longer term sustainability and resilience of the city region
food system:

The tool is aimed at those undertaking food system analyses of sustainability and planning for
future resilience at a city and city region level. Areas of interest for a city or city region might
be, for example to:

The indicator framework has been developed around 21 key “desired direction of travel” areas
that characterise a more sustainable and resilient city region food system (‘A Vision for City Region Food Systems’, FAO & RUAF Region Food Systems’). Following initial work at two Expert Meetings organised in Rome (March 2015 and April 2016) in Rome (March 2015 and April 2016) a set of 210 indicators/measures has been com piled to help measure both baseline data and ongoing progress towards these desired food system sustainability and resilience changes. The framework further builds on experiences from its application by local team in seven cities on different continents.

Taking a ‘whole food system’ approach, the indicators are based on a matrix of food system
dimensions: the sustainability areas that reflect the multifunctional nature of the food system;
and ii) the components of the whole food system (from production th rough to waste, and also
food system policy and planning).

This City Region Food System Indicator Framework is part of the City Region Food Systems
(CRFS) toolkit to assess and plan sustainable city region food systems. The toolkit has been
developed by FAO, RUAF Foundation and Wilfrid Laurier University with the financial support
of the German Federal Ministry of Food and Agriculture and the Daniel and Nina Carasso
Foundation. 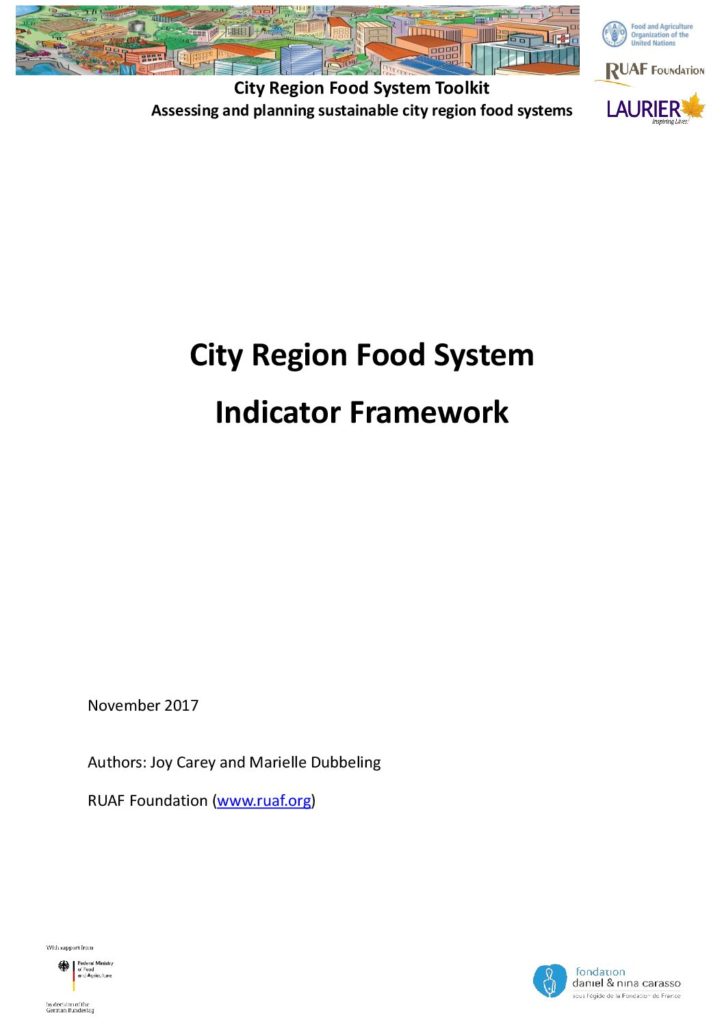